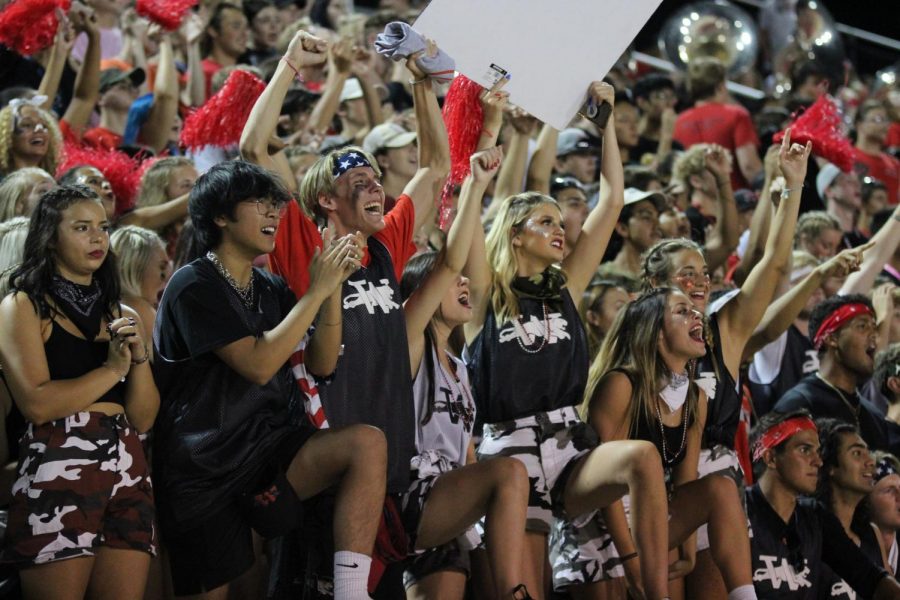 BLEACHER CREATURES Seniors Louis Nguyen, Trever Berdinner, Hayden Jeffries, Zoe Curtis, Allie Thompson, and Kailyn Stonebraker made their way to the front row of the student section to lead the crowd in chants at Moore War.

Jaguars are aggressively proud animals. The Westmoore Jaguars’ student section Twitter—with over 1700 followers—is no exception. The Twitter account, @WestmooreSS, is run by an anonymous senior, and while it does update jaguars on football game information, it never passes on the opportunity to light up anyone who challenges it.

As mentioned before, the Twitter handle tweets out the student section’s theme, attire, and any game information/changes. The account also hypes its followers with retweets and cleverly edited content.

The account is notorious for roasting and calling out those who dare throw shade at Westmoore High School. Recently, during the tense month of Moore War and Southwest Showdown, the student section Twitter was quick to respond with witty comebacks to attacks from other schools. Kids in every classroom after Moore War were talking about the beef between WHS and MHS student section twitters (click here for more).

It also acts a special tradition as the account management falls into the hands of a new senior every year. Looking beyond just the surface of a computer screen, the Jaguar student section Twitter acts as a tribute to Westmoore football team and seniors.

“I get really excited for the next game and seeing the notification of a new tweet. It’s especially funny laughing at the Twitter’s great comebacks. Our student section is seriously making my senior year the best!” senior Kaleigh D. said.

Is the Earth Actually Flat? The Jagwire Investigates