A Look Behind the Curtain 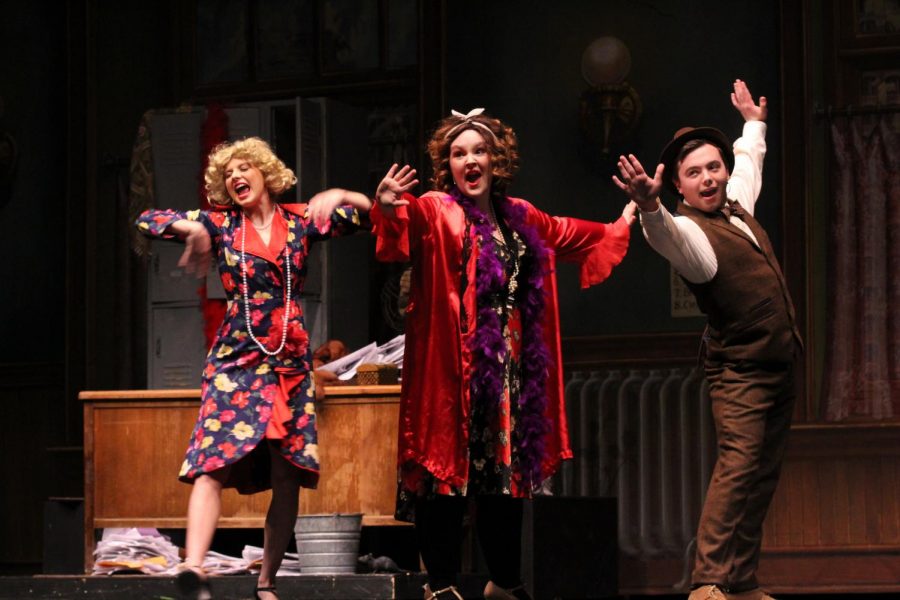 Singing "Easy Street," seniors Kate Wenger, Alyssa Hill, and Lathan Jeffries dance about kidnapping Annie and stealing the check. "My favorite song from the musical was by far 'Easy Street.' It was upbeat and fun to do. I wanted to be Rooster because he looked like such a fun, slimy character to play and the bad guys always get to have more fun during shows," Jeffries said.

The Sun Will Come Out Tomorrow.

Bursting on the stage with hope and vitality the musical Anne, consisting of two casts, won over the crowds’ heart. March 4th, the auditorium stage came alive with the student performances.

During the months of rehearsals leading up to the performance, the director Mrs. Landrum’s father passed away from significant spontaneous brain bleed on December 16.

Her father, Mr. Robert Hill was a longtime supporter of all the drama performances since 1985, sitting in same house seat for 35 years. He helped with running errands throughout the drama season.  Joining together, the cast dedicated the entire production in his memory.

“His passing affected the show greatly and made us want to try harder for it to be the best show for Mrs. Landrum,” Cloud said.

The play had double casts, which means that the leading roles had two actors/actresses to alternate shows. The pairs, called a double, would go to each performance to help each other with costume changes or anything else they needed. They would also be there for when one got hurt and the double needed to step in.

Both casts would rehearse and take notes to improve their performance. When one cast was performing during a rehearsal, the other cast would take notes. They helped each other out to perform at their best.

Once they got started on casting and rehearsals, everyone felt the pressure of improving from their previous musical. Everyone that contributed spent their nights after school until sun-down to perfect their performance.

“There were many times of tears and frustration but hard work and encouragement from everyone really was helpful,” Gunter said.

After 99.5 hours of rehearsals, hours upon hours after school over a series of 4 months, the show was ready to take the stage.

“My favorite part was the final scene, which was done extremely well,” sophomore Hailey Carroll said after attending the school performance. The cast had a blast performing and bringing the classic story to life for the audience. “I was so impressed with the quality of the acting, sets, and the vocals,” audience attendant, Julie Schofield, said. “It was not what you expect when going to a high school performance.”

Annie is the story of an orphan that finds a home with Daddy Warbucks.  This musical found a home in the history of Westmoore drama department performances filled with optimism and hope.  Two things all students need as they graduate.