Although it started as a few girls, the Women's Wrestling program grows after the success of pioneer wrestlers 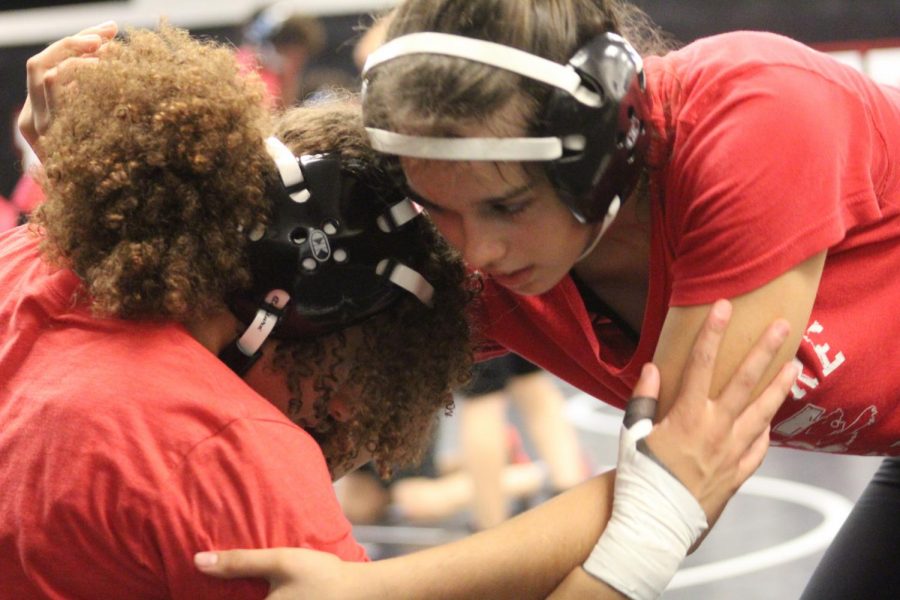 MOORE, OK – Stepping out under the big lights, a new team makes its debut. All weighed in and refueled, the competitors make their way to the stands. Now, it is a waiting game. The wait of who will be first on the bracket, who will battle, who will win within the top five, who will lose, who will leave a legacy – only one place would answer all these questions: the mat.

Sophomore Shelby Kemp and alumnus Mireya Lopez were the first to compete as the only female wrestlers. Last year, this new women’s team was created with the employment of Coach Kaitlin Ramos and these two pioneers.

“It was hard at first. We didn’t know what we were doing, but we kept showing up and it paid off,” Kemp said.

Last year, Kemp carved her name into school history as the first female wrestler to qualify at regionals for the state tournament. Not only was Kemp a freshman, but she had just begun her wrestling career.

“It felt great to qualify. It was the moment I realized all the work I did pay off, and it is when I finally realized that wrestling is what I want to do in high school and maybe college,” Kemp said.

Since Lopez graduated, it is now up to Kemp to carry on the legacy. She returned this season, joined by freshmen and transfers from other schools to the women’s program.

“I love it. I actually get to wrestle here because Westmoore accepts girls,” Smith said.

Last year, there were less than five girl wrestlers. Fourteen girls are now in the growing high school and junior high programs.

“I see the girls’ program growing in the future. I think that I was only the beginning and that there are going to be a lot more girls that will make it to State,” Kemp said.